Let me first say that [Questionable Content] is hands down my favorite online comic and I've been following them for more than a decade now and have viewed EVERY SINGLE STRIP.

Every once in a while there is a strip that speaks to me in a profound way. Monday's post did just that. 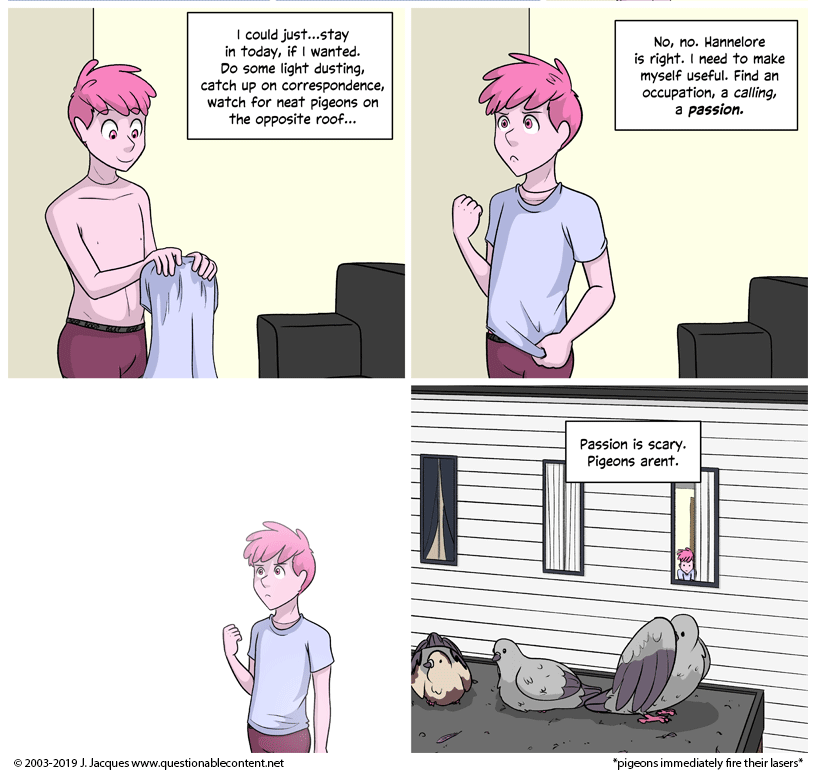 Aside from the fact that pigeons are the rats of the sky (don't at me). There is something profound with the idea of doing things for the sake of the norm.

For years, the idea of PIT was to get into podcasting and scratch an itch. Every time I wanted to take things to the next level, I would let things start to fade off because the potential growth was scary.

I would start with so much vigor but then things would dwindle and I would make the excuse that I just wasn't interested in that thing anymore.

If I were honest, it was because I was scared.

In fact even in PIT's rebirth it went from being a way to help developers be more productive with coaching into a pivot to content editing because the apparent lackofdemand was scary.

My daughter, wife and I watched Tangled over the weekend. There is a wonderful scene where Repunzel asks a group of thugs, "Haven't you ever had a dream?"

I've lost many dreams due to fear. I've instead looked at the pigeons out my window and tried to convince myself that would be enough for me.

It's true that my current position is a dream that came from fear. Still, it is a dream. I want to help developers create wonderful content for other developers.

I was terrified that I wouldn't see success and now that I have a marginal bit of success, IT's EVEN MORE TERRIFYING.

That said if I use that excuse as a way not to run my business (my way) I will never see that dream come to life. I'm not saying I should throw caution to the wind. I just think I should check both ways and then cross the street to get to where I've been wanting to get to for the past 6 years!

Tomorrow's Post will be the regular update as usual. The blog portion of the Render Engine that I'm building (Now in testing) is still a little wonky so I wanted to share this here. This post will eventually be added to the blog.
Back to Blogs...